2,000 Year-Old “Computer” Discovered Off the Coast of Greece 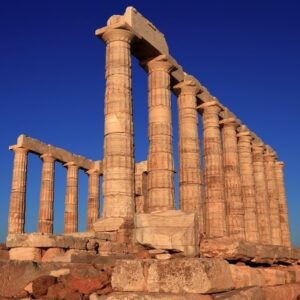 When you think of a computer, you think of a machine that makes your life easier. You can look up events, check facts, record data, and so much more. However, the first computer might be something extraordinarily unexpected; a submerged treasure off the coast of Greece called the Antikythera mechanism, which was used to predict and track astronomical events, like the movement of the planets or the occurrence of eclipses.

The Antikythera mechanism is thought to have been discovered at the turn of the 20th century, by sponge divers off the coast of the Greek island Antikythera. It’s dated at having existed sometime between 60BC and 200BC, which makes it well over 2,000 years old. It was found aboard a shipwreck, submerged in 45 meters of water, along with several other treasures, including statues, coins, and pottery.

At first, it seemed to be nothing but a pile of bronze and wood, but upon closer inspection, the machine turned out to be something quite extraordinary. Consisting of bronze gears, the Antikythera mechanism attempted to predict astronomical cycles. The device was originally found in one big clump, but the device was later split into three sections for study. It’s thought that the mechanism, in its prime, consisted of up to 30 bronze gears that operated like clockwork.

Click here to view a photo gallery of the Antikythera mechanism on display.

Now, the Antikythera mechanism is in about 82 different pieces, which were used in a study to determine what the cryptic text carved into it means. The inscription on the gears is so small that not even the human eye can truly decipher it – not after thousands of years of corrosion and weathering from the elements, at least. Researchers had to use x-ray and visualization technologies to make out what some of the Greek letters could mean.

The thought of such advanced technology existing so many years ago brings up several interesting points. Today’s society is often credited as being the most technologically advanced of its kind, but back in Ancient Greece, the Antikythera mechanism was considered high-tech. The ability to make an astronomical clock was hundreds, maybe even thousands, of years ahead of its time. Knowledge of how to make a contraption like this was lost and wasn’t recovered again until much later on, sometime during the 14th century. It makes you wonder what other civilizations before ours came up with, and how much of it was lost to the harsh ebb and flow of time.

So, what does this have to do with your business? We want to say that it presents an interesting take on innovation, but honestly, as tech geeks, we just wanted to share this cool tidbit with you. For more great technology news, tips, and tricks, be sure to subscribe to our blog.