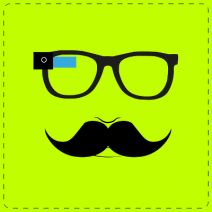 Wearable technology is still relatively new. While technologies like Google Glass have found enthusiastic users, in the eyes of the general public, the verdict is still out. The best thing a Google Glass user can do with their favorite new tech is to use it responsibly. Here’s some tips on how to be a good AmGlassador!

Don’t Use Google Glass as a Status Symbol
Google Glass may be slow to catch on due to its $1,500 price tag. The high cost of Glass makes it not the most practical purchase, especially considering that 1,500 clams can get you almost any mobile device that can outperform Glass in every arena. There will always be people in our society that will purchase much-hyped and expensive technologies like Glass in order to flaunt their wealth. Glass makes this status-symbol annoyance worse because the device literally sits on the user’s face, making it impossible to ignore. It’s okay to buy Google Glass to make yourself look cool, but as far as etiquette goes, just because you got it, doesn’t mean you have to flaunt it. Okay, maybe it’s just that everyone else is jealous of your cool new glasses.

Understand that Google Glass Can Make Others Feel Weird
As a user that’s plugged into the latest tech trends, it can be easy to forget that not everyone values wearable technology like you do. In fact, when wearing a device like Glass, you’re likely to encounter a few folks that are just plain paranoid of your device. What people don’t understand they naturally fear, and our society today is sensitive and fearful about too much surveillance and the posting of unwanted personal information on the Internet–a task for which Google Glass is uniquely designed for. It’s good etiquette to be sensitive about this. If someone is giving off social cues that they’re uncomfortable with wearable technology like Glass, then be a good sport and remove it.

Take Off Wearable Tech Before Entering Sensitive Environments
Public restrooms, doctor appointments, movie theatres, locker rooms; all of these are places where devices like Google Glass shouldn’t be worn. As a rule, you shouldn’t wear a camera on your face in places where the use of cameras are prohibited. It’s good technology etiquette to simply remove the device before entering one of these premises.

Be Prepared to Cordially Handle Peoples’ Reactions
Like it or not, a device like Google Glass, especially at this stage in the game, will attract a lot of attention from those around you. People will want to stop you and ask you questions, and they may even ask if they can try it out. You don’t want to react to curious people by being a jerk (or what the tech world is calling “a Glasshole”). Instead, be prepared for the extra attention and make sure you react to people’s stares and inquiries in a positive manner–even if it’s the millionth time you’ve been asked, “Is that Google Glass?”

New technology like Google Glass is exciting, and if its early adopters use it in such a way that attract people to its benefits, then it will help wearable tech quickly become a common fixture in our society. What do you think about wearable tech? Can you think of additional wearable tech etiquette tips? Have you had any negative experiences with Glassholes? Share with us your thoughts in the comments!