An IT Christmas Carol 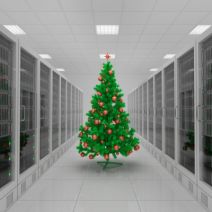 A technology-based parody of the classic Christmas story, “A Christmas Carol,” by Charles Dickens.

Once upon a time, in a land not much different from this one, there lived a business owner. His name was Scrooge. He wasn’t an unlikable fellow; jolly and cheerful at any glance, his smile could light up the darkness in anyone’s life. Yet, when the winter months arrived, and a chilled wind blew across the land, so too did a fell gust freeze his heart. It was time to figure out why his systems were hacked (again), and he knew it would be an expensive endeavor. How he hated managing his IT.

It was December 24th, the night before Christmas, and the busybody was burning the midnight oil in order to get his server back up. Scrooge struggled to wrap his mind around the bizarre complexity of his current process. His brain, lax and dulled by hours of work and a failing caffeine buzz, grew clouded. With an exhausted turn of the head, he glanced at the clock: One hour past midnight.

Before he fell into a deep sleep, his thoughts were of his family back home, warm and snug in their beds, eagerly awaiting the luscious display of gifts and holiday cheer which awaited them in the morning.

The Ghost of IT Past
When Scrooge awoke from his slumber, his body was wrapped in a blanket of frost. The window in his office was open, its pale curtains fluttering in the breeze. He got up and shut the window, taking note of what may have caused it to open. Was it forced entry? Would he have to check the security cameras?

How long had he been asleep for? With a fervent glance at his office clock, he checked the time. Still 1:00 a.m. How had no time passed at all? His mind was racing with questions, when out of the corner of his eye he noticed a faint glow; an ethereal light not of this world illuminated the hallway to his office. Cautiously, he approached it, and couldn’t believe his eyes.

In the hallway stood a ghostly figure, wrapped in an ancient cloak, tied together by what appeared to be an ethernet cable, complete with blinking, electronic pulses flowing in it in a cyclic fashion. It appeared a child, yet its hair was a gleaming silver like that of an old man, and it held branch of holly in its hand. Upon its head rested a modem crown, which the ethernet cable plugged into, basking the area in front of it with a brilliant flickering green light. A faint noise reverberated through the air; the dial-up tone, a sound of times long since past.

“Who in the world are you?” Scrooge asked, blinded by the display. “I’ve never seen you before. Are you a spirit?”

“I am the Ghost of IT Past. Your business technology’s past, to be specific. Sorry, give me one moment.” It promptly unplugged the cord, waited several seconds, then plugged it back into the crown.

“Sorry,” it said. Its voice faded and echoed, as if from a different plane of existence. “I had to reset my wireless connections. Sometimes it’s a little spotty.”

With a wave of the Spirit’s arm, Scrooge felt himself growing light, and with a supernatural flurry of snow, the odd pair found themselves standing in front of a brick manor. Ivy climbed the structure up to the tallest tower, and a faint light glimmered in the entryway. Light snowfall fell from an overcast sky.

“Do you recognize this place?” the Spirit asked.

Scrooge did. He was looking at his home several years ago, before the entryway crumbled and they were forced to move. He and his wife celebrated every Christmas in this building. He stepped through the icy snow, each footstep making a crunching sound. Upon peering into the first-floor window, he saw a younger version of himself, sitting in front of a dazzling, colorful Christmas tree with his wife. Her belly was round with child. They were smiling. Scrooge couldn’t help but grin at the sight.

“Why are you showing me this?” Scrooge asked.

“You hate Christmas, yet you don’t show disdain for this moment?”

Scrooge checked his phone. Still 1:00 a.m. “Why would I? It’s not Christmas I have a problem with. It’s hackers, and the current state of my network security. It’s not like this year. It was a different time.”

“Indeed it was,” the Spirit said, unplugging the ethernet cord in its gown. The dial-up tone grew louder and more deafening. “I must now take my leave of you. Do not forget what you have seen here.”

And then, just as it had arrived, like a faulty WiFi signal, the Ghost of IT Past was gone with a puff of icy fog.

The Ghost of IT Present
Then, as if from out of nowhere, a second Spirit appeared; this one tall and slender, cloaked in a glorious robe with an emerald hue. It hung loosely over its body, and its form seemed light as air. It might not even have existed, as far as Scrooge could tell. On the crown of its head, it wore a holly wreath. It carried a tablet-like smartphone in its hand. The Spirit didn’t once look at Scrooge.

“The Ghost of IT Present,” the Spirit said, not taking its eyes off of the smartphone. “I’m here to show you what your current IT situation looks like. And let me tell you, it’s not pretty.”

“Well, I could have told you that,” Scrooge said. “It’s not my fault I got hacked on Christmas Eve.”

“This happens every year. You should have taken steps to prevent it after last year’s debacle.”

“There’s nothing I can do!”

Dark clouds gathered around Scrooge and clung to his skin, suffocating him. Before he knew what had happened, he found himself back in his office. Scrooge sat staring at a mirror image of himself, only something was different. His reflection was on the phone, arguing with someone. He looked angered; scary, even. He slammed the phone down on the hanger, then began furiously typing away at his computer. Scrooge couldn’t help but feel angry for him, trapped in front of his workstation on Christmas Eve.

“Admit it,” the Spirit said, “You can’t keep doing business like this. It’ll ruin you.”

Hesitantly, Scrooge agreed, but he wasn’t quite ready to throw in the towel.

“But I don’t know how to move forward.”

The Spirit’s phone rang to the tune of “Silent Night, Holy Night.” It checked it at once, then turned to Scrooge. His office faded to black, and the pair was left standing in a void of blackness.

“Sorry, I have to take this. Call me when something breaks,” it said, and without another word, it disappeared.

“Wait!” Scrooge called out, but it was too late. He was left alone somewhere in the cloud, a void of blackness.

The Ghost of IT Yet to Come
With the disappearance of the Spirit, Scrooge felt a certain sense of relief. Yet, he was stuck in some outer plane of existence, unsure of how to make it back to his world. He started to panic, and call out for help; but no matter how loud he screamed, nobody came to help him. Just when he was about to lose hope, he noticed a boat sailing toward him, creating ripples in the fabric of space and time. At the helm of the ship was a black-hooded figure with skeletal hands, its cloak wrapped in chains tightly clenched around its bony form. Upon closer inspection, it seemed to be guiding the raggedy old boat by using touch-screen controls.

“Let me guess,” Scrooge said, “You are the Ghost of IT Yet to Come?”

The Spirit said nothing, but Scrooge could feel its icy gaze behind the veil of its hood piercing through his soul. It beckoned Scrooge to climb aboard, and he did. The figure was surrounded by a strange aura. Scrooge couldn’t tell if it was despair or dread, but he was glad to be on his way once more. As they sailed on down the inky river of darkness, the world around them began to reform. Buildings materialized, trees sprouted from the ground, and the winter winds returned. Scrooge was so distracted by his fear of this creature that he barely noticed the ship was docked in front of a building.

Or rather, it used to be a building. The integrity of the structure was practically nonexistent. Scrooge found he was looking at a pile of ruins. The Spirit stepped out of the boat, light on its feet and as wispy as smoke, pointing at the rubble. Scrooge clambered through the debris and found some recognizable wreckage from the building’s past, though he wish he hadn’t.

It was his business’s headquarters. Because Scrooge was so involved with fixing his business’s IT issues, he couldn’t focus on other important parts of business. The budget quickly broke, and suddenly he was out of business and out of money. He witnessed several folks walk by the building, but none of them gave it even a passing glance.

“Please, Spirit, tell me how I can prevent this from happening!” Scrooge pleaded. “Show me how I can save time and money on my IT expenses by switching to managed IT services.”

The figure handed him a card, and disappeared without a word. The card read, “Call SemTech IT Solutions at 407-830-1434 for a free IT consultation.” Feeling like he had nothing to lose, he gave the company a call.

And that, folks, is the story of how Scrooge changed the future of his business by integrating managed IT into his computing infrastructure. Now, he doesn’t waste his holidays fixing problems with his server, or protecting his business from relentless cyber-attacks. He now spends his holidays happily at home and at peace with himself.

The moral of the story is that you don’t have to waste time on the holidays taking care of your IT. Give your family the best gift of all this holiday season: Yourself. With managed IT services from SemTech IT Solutions, you won’t have to worry about your IT while you’re on a holiday break. We can remotely monitor and maintain your network for any abnormalities. Give us a call at 407-830-1434 to learn more.