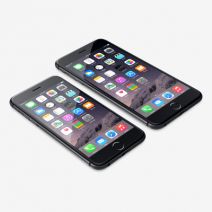 Apple is back with another iPhone! The Silicon Valley-based hardware and software manufacturer has released the new versions of their extremely popular iPhone series of devices. The two-headed approach that Apple took with their second incantation of the iPhone 5 (the 5s and 5c), is replicated this time out as well. After being surpassed by Samsung over the past two years, does the iPhone 6 and its larger version, the iPhone 6+, have what it takes to get Apple back on top?

What is New?
Apple has traditionally denied the “bigger is better” philosophy that most other smartphone OEMs have adhered to over the last couple of years, remaining secure in the notion that their products have superior functionality, design, and usability as compared to the other leading smartphone manufacturers out there. After ten fiscal quarters of losing out to bigger, more feature-rich devices, Apple decided that it was time to adopt some of these strategies before they were truly left behind. The result is a smartphone that adds the computing brawn that other iPhones have lacked, while staying true to the level of quality that Apple users have come to expect.

Made of aluminum and glass, the iPhone 6 is well-built and very thin. At 6.9 mm and 129 grams it is one of the thinnest and lightest smartphones on the market. The larger, iPhone 6+ is only slightly wider at 7.1, but weighs a comparatively robust 172 grams. The iPhone 6’s 4.7-inch display provides users a pixel density of 326, while the iPhone 6+’s 5.5″ display produces 401 ppi. The former has the same ppi that’s found on the iPhone 5s. This doesn’t mean the display is lacking, however. DisplayMate Technologies, a specialized web-based company that covers video diagnostics found that the displays used by the iPhone 6 and the iPhone 6+ were the best LCDs to ever adorn a smartphone. Clear color reproduction plays as big a role in this great viewing experience as does the pixel density.

Where this device really shines is in the ways that all Apple devices do: with the software. Apple extends the superior functionality of iOS 8 to the iPhone 6 and iPhone 6+. The look and feel of the mobile OS hasn’t changed much over the years, but with many new innovative features, Apple has begun to integrate features from the many communication applications that modern users rely on into the central communicative apparatus. This provides enhanced options in photo and video messaging as well as integrated options to get to those interfaces.

How Does it Stack Up?
The Apple iPhone 6 is another powerful version of Apple’s top-selling smartphone line and besides the complaints some consumers have about the apparent fragility of the device, it seems to be another reliable product produced by Apple. Traditionally, the manufacturer is an industry pioneer at marketing their products, but this time around, there hasn’t been a full-out marketing blitz that we are used to. The people behind the iPhone 6 and iPhone 6+ know they have a huge contingent of consumers just waiting to soak up all the iOS goodness, and thus far, most of the marketing has been in response to competitor OEMs who have knocked Apple’s newest additions as late-to-the-party.

Some are even going so far to say that the device resembles old versions of their own devices. These ads are aimed to undermine the true effectiveness and reliability that iPhone is known for by making Apple look less like an innovator and more like an imitator. If preliminary sales figures are any indication, consumers aren’t paying much attention. The iPhone 6+ is currently on backorder at nearly every retailer that carries Apple products due to demand being so high and the Apple Store not opening for pre-orders on time.

Apple has been a leading innovator in mobile technology for almost a decade, and while their new devices, the iPhone 6 and iPhone 6+, don’t present consumers anything new in the way of specifications, they do offer users some new features through the software. What’s your take? Are you one of the nearly 20 million people who have already purchased the new iPhone 6 or iPhone 6+, or are you one of the millions of Android users that think the new iPhone is already old news? Sound off in the comments.