Have You Experienced Internet Troubles Lately? 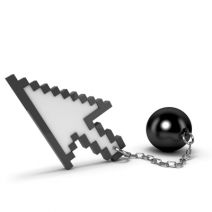 You may have noticed last week that the Internet was having some trouble with its operating speeds, but now we know for sure why. The root of the problem lies in Tier 1’s Internet routers’ Border Gateway Protocol routing tables, which have exceeded their maximum size, and has brought about the failure of these routers to operate at maximum speed.

Got all that? Good.

This problem was foreseen long ago, and it is predicted to happen again in November. Border Gateway Protocol (BGP) is the Internet’s most important high-level protocol, and each routing domain is created to be an autonomous system. This means that they automatically locate the shortest routes to their destination. ZDNet describes the tier system used by BGP’s:

A Tier-1 network has access to the entire Tier 1 Internet BGP routing tables. Typically, a Tier-1 network such as the big three Tier-1 ISPs – Level 3, NTT, and TeliaSonera – provide 10 to 100 Gbps Internet connections to tier-2 and last-mile ISPs.

As you can probably guess, understanding these high-speed connections can get confusing without some sort of way to map them out. That’s where Tertiary Content Addressable Memory (TCAM) comes in, recording where all of the connections route to and from. But herein lies the problem – older routers only have so much memory to record these maps, and max out at 512,000 routes. Once routers reach this limit, network performance can be severely hampered.

BGPMon, a company which tracks networks, issued the following statements concerning the present status of BGPs:

In other words, this is why your Netflix has been slow.

The issue might have been fixed temporarily, but the Internet is always growing, and will continue to grow and exceed the 512,000 mark, all in due time. In fact, it is estimated that by February 2015, Internet Protocol version 4 (IPv4) addresses will be depleted. This means that ISPs will need to use more modern IPv6 addresses, which allow for a greater supply of IP addresses, in order to function properly.

The only reason this is an issue is mainly due to simple, sweet ignorance from most ISPs. A lot of them are running outdated routers that are using full tables without being aware of it. This can be for a number of reasons – perhaps a consultant set it up long ago, or an employee who is no longer with the company left a less-than-stellar legacy behind them. Whatever the reason is, the root cause of the problem can be linked to not having proper hardware in place for a network’s needs.

Have you been a victim of these Internet hiccups? What are your thoughts on these developments? Be sure to let us know in the comments.