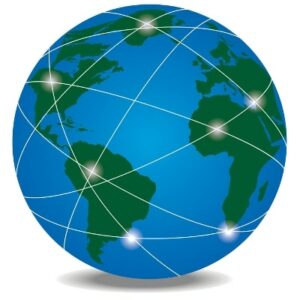 Have you ever wondered how the Internet is capable of connecting countries on the other side of the world? You may already be aware of this, but the Internet’s cables run deep underneath the ocean’s surface, all around the world. In fact, you might wonder how we could even keep these cables safe when they’re submerged underneath such an immense amount of water.

Just like a mighty octopus, the Internet’s tendrils wrap around the Earth, connecting countries and infrastructures in unprecedented ways. Almost all of the transoceanic digital communication, including phone calls, emails, and pretty much any Internet communication, relies on these cables. According to WIRED magazine, the first telegraph wire was laid across the Atlantic Ocean in 1866, which set the precedent for using wired technology for overseas communication. The cables which followed were typically laid along trade routes, with more modern cables following suit. Later on in the 1950s, the standard shifted to coaxial cables which could carry telephone conversations. Today, the standard consists of fiber-optic cables that can transfer huge amounts of data at an incredible rate.

Here’s a video of how these cables are laid:

And a map of where they’re all located: These cables have become an absolutely imperative part of how society communicates. Yet, these cables are at much greater risk than you might think, and most people don’t really worry about them until a potential problem presents itself. In fact, they’re often forgotten about until something goes wrong, though it’s not unheard of for submarines and other entities to take interest in these wires.

According to WIRED, the following situations are generally threats to the Internet wires: seismic activity, the various undersea creatures (primarily sharks), and even international intervention. However, by far, the most common issue is the last one you might think of: ship anchors and fishing nets, which account for about 60 percent of any cable destruction activity. This is why maps will now mark the location of these wires, as severing them can lead to serious consequences.

When you think about it, wouldn’t it be really easy to completely sabotage communications? Messing with undersea cables happened in previous World Wars, but such deplorable actions haven’t taken place in recent times. Still, it never hurts to be cautious and consider worst-case scenarios for catastrophic events like these. Now that we’ve renewed your curiosity in these cables, what are your thoughts on them? Do you think they are an antiquated method of deploying data throughout the world? Let us know in the comments.