Is it Time for the PC to Make a Comeback? 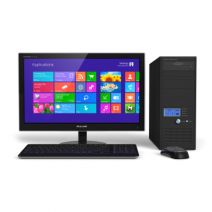 Over the past few years, we’ve seen a revolution in the computer market as mobile device sales skyrocketed and PC sales slumped. If this trend were to continue for just a few more years, PCs would have possibly become extinct. However, as is the case with any trend, it appears things in the computer world may be normalizing.

PC Manufacturers are Optimistic
This optimistic outlook on the future of PC sales comes from Intel, which just released an advisory increasing its expected quarterly and yearly revenues and gross margins, saying, “The change in outlook is driven mostly by strong demand for business PCs.” On the retail side of things, Best Buy is echoing Intel: “We’ve actually had a revival of the PC business. […] The tablets boomed [but] the volume has really gone down.”

There are many reasons as to why we’re seeing this sudden change in demand. We think that one of the strongest reasons is that, as great as mobile devices like tablets are, they will never be able to do everything a PC can do. Therefore, businesses will always have a demand for PCs.

The Stalwart Nature of Workstations
Even though tablets make working on the go super convenient, there are still many work tasks that just aren’t cut out for the small screen. Have you ever tried typing out a lengthy email on a tablet? It’s a maddening experience. Or what about using a tablet to enter a significant amount of data into a spreadsheet? Doing everyday business tasks like these without the aid of a keyboard and a decent-sized monitor will make you want to test the durability of your tablet by chucking it across the room. Don’t get us wrong; it’s nice to have the mobility, and tablets are super convenient, but replacing all of your computer usage with a tablet is a little far fetched for most people.

Despite these limitations being known throughout the business world, we’ve all read headlines over the past couple of years touting the death of the PC. This is a bold claim, especially considering the vast amount of businesses that still use PCs and can’t see themselves efficiently accomplishing their workloads by switching to tablets. Therefore, it appears as if the bold claims about the PC’s demise were based on sales figures and trends like the one that saw smartphone and tablet sales catch up to PC sales in 2011. In 2013, smartphone and tablet sales hit 1.25 billion units, while PC sales dipped below 2011 levels with sales figures in the neighborhood of 300 million. These sales figures, however, don’t reflect the reality that doing business on a mobile device is impractical for many companies.

A Bad Economy and Better-Made Machines Deflated PC Sales
Two other major factors that surely influenced the “PC is dead” rhetoric is the economic downturn and the reality that older PCs can easily run newer software. In the past, the economy was doing better and organizations had more disposable income to spend on upgrading their hardware. The worldwide economic downturn of 2007 changed that mindset as companies tightened their budgets. Additionally, as more software became available via the cloud, more organizations embraced running the newest apps on older equipment, taking the urgency out of upgrading equipment.

Eventually, You’ll Have to Upgrade
This is all fine and good, but why are we now seeing an increased demand in business PCs? Think about all those businesses that put off upgrading their hardware after the economic downturn. Tech experts claim that the lifespan for a disc hard drive is five years, meaning that, after the five year mark, a hard drive will have increased performance issues and be at a higher risk of crashing. 2007 was seven years ago. Many businesses that refused to upgrade all these years due to budget concerns are now having to bite the bullet and purchase new hardware due to their old hardware finally showing its age.

Intel has foreseen this increased wave in businesses finally refreshing their hardware and they’ve adjusted their sales forecasts accordingly. Additionally, it appears that, after years of skyrocketing growth, 2014 is the year mobile device sales will reach its peak and sales figures will plateau. This sales plateau was inevitable. It was impossible for mobile device sales figures to sustain such unprecedented growth unless the devices were to find new users in new markets. At this point, if someone doesn’t own a mobile device, it’s because they don’t want one, not because it’s an unattainable hot item.

Stay Ahead of the Trends
At SemTech IT Solutions, we’ve been watching these trends and standing by the PC, even when things looked bleak for its future. We stay on top of all of these business technology trends so that you don’t have to. At SemTech IT Solutions, we’re focused primarily on meeting the computing needs of your business. If you need to upgrade your organization’s older workstations to meet the increased demands of doing business, we can help you with this. If you’re sold on the benefits of going mobile and want to switch out your bulky workstations for sleek tablets, we can assist you with this too.

Call SemTech IT Solutions at 407-830-1434 to stay ahead of the trends and make technology work for you!