Is Your Business Ready for the Security Challenges of Wearable Tech? 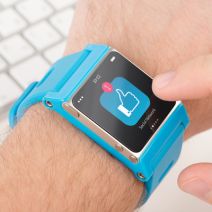 Due to the growing popularity of employees using their personal devices in the workplace (BYOD), many companies have created BYOD policies to handle the unique security threats brought about by these devices. Does the new trend of wearable technology mean that you need a separate WYOD policy?

If your business happens to have a BYOD policy, then you may think that this will cover any security risks posed by wearable devices your employees bring to work. After all, what capabilities does a wearable device have that a tablet or smartphone doesn’t? At this stage of the wearable game, wearable tech doesn’t offer the same robust features as their smartphone and tablet counterparts.

In fact, wearable devices like the smart watches currently on the market tend to primarily compliment a user’s smartphone. Plus, smart watches seem to be designed to only run a few primary tasks, and they lack both significant data storage space and multi-peer communication capabilities. Therefore, a business with a solid BYOD policy may not deem wearable tech to be a security threat. If anything, wearable tech may appear more like fashionable charms that can do a few party tricks rather than actual tools capable of making a difference in the workplace.

However, with the launch and adaptation of more powerful wearable technologies on the horizon, you may have to reconsider the security risks brought about by WYOD. For example, wearable devices like Samsung Gear and Google Glass offer users a robust operating system with a fair amount of storage, meaning that a wearable tech user wanting to use their device to steal sensitive company information will soon have the technology literally on their body to do it.

Additionally, wearable technology is such a new trend that many of the devices currently on the market don’t come equipped with enterprise-level security applications. A business that doesn’t shore up its additional network access points presented by the wearable technology its employees are using, will be giving hackers a backdoor to the company’s network via an employee’s wrist or headwear.

As wearable tech becomes more powerful, developers will equip the devices with better security software. Due to the security risks associated with any mobile device, it could become important to not let any employee-owned wearable device access your network without first running it through the same security procedures as other mobile devices accessing your network like laptops, tablets, and smartphones.

Your business will also want to be aware of new security threats brought about by the new capabilities of wearable devices. For example, a hospital doctor wearing smart glasses may bring about accusations from patients that their visits are being recorded, thus breaching their privacy. This could bring about a major lawsuit for the hospital and should therefore be considered in the organization’s WYOD policy. The nature of your own business may present sensitive situations where an employee using wearable tech would only exasperate things, making the technology a liability.

As wearable devices continue to become more capable and more powerful, the wearable device trend will continue to grow. Do you have a WYOD policy and a mobile device management solution that’s up to the new security challenges brought about by wearable tech? Don’t leave your business vulnerable because you didn’t prepare your network for this major trend. To learn more about BYOD, WYOD, or how to utilize wearable tech for your business, give SemTech IT Solutions a call at 407-830-1434 via any part of your body!