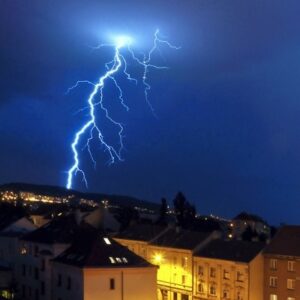 With so many businesses switching to the cloud for their data storage needs, it’s assumed that their data will be safe and sound. However, this is only somewhat true. While it’s true that the cloud is a secure and effective way to store your data, the virtual cloud is still vulnerable to freak accidents. Take, for example, the time when Google was struck by lightning last month… four times.

Yes, that’s right. The mighty Thor, Norse mythology’s god of thunder and lightning, rained down his mighty judgement upon one of Google’s Belgium-based data centers. Whether or not he was tricked by his brother Loki, the Norse god of mischief, into frying the data center is yet to be determined. It’s safe to say that the data center, which was used primarily to host Google’s Cloud Platform, sustained heavy damage; precisely what you might expect from four consecutive lightning strikes.

Despite Thor mistaking Google’s data center to be the mighty jaws of Jörmungandr, the infernal serpent of Midgard, about 5% of the disks in the center could no longer read or write data. This translates to roughly a 0.000001% loss of the center’s data, on which Google reported that “in these cases, full recovery is not possible.”

While it might seem like such a small perchange, much less than even 0.5%, is a negligible amount of data and hardly worth mentioning, the odds are is that it isn’t your data that was lost. Depending on how much information you have stored up from your time as a business, losing even a fraction of your data can be a complete and total detriment. When you lose files, especially important ones, it could have far-reaching effects on your operations infrastructure. So, naturally, it’s imperative that your organization has some type of backup and disaster recovery plan put into place.

Of course, a technology juggernaut like Google (as you might expect) did, in fact, have measures put in place to protect against freak accidents like a singular lightning strike. However, it’s unlikely that any data loss measure can protect from the immense amount of natural energy produced by four lightning strikes.

So, the lesson we all can learn from this situation is that your business always needs to be prepared for disasters that can’t be predicted. Despite the completely absurd chance that this situation were to happen again, Google assures users that they’re taking steps to make sure that such a catastrophic loss of data is avoided in the future. Of course, if there’s one thing that’s for certain, it’s that mankind only has finite ways to combat the awesome power of nature.

A backup and disaster solution from SemTech IT Solutions can help your organization avoid unnecessary data loss in the event that natural forces, like floods, hurricanes, and even lightning strikes. Give us a call at 407-830-1434 for more information.