Procrastination Nation: How Doing a Little Now Can Lead to a Lot Later 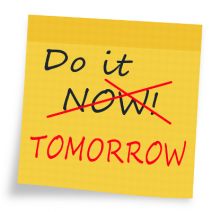 How are you coming on those New Year’s resolutions? If you’re already putting off doing them due to a case of getting bit by the procrastination bug, then you might be feeling down on yourself and thinking about giving up. But, did you know that doing something a little later might actually be a better way to get something done?

What a lot of people don’t understand is that there is a difference between being “simply lazy” and being a procrastinator. There also seems to be a lot of controversy over what procrastination really is. According to the Merriam-Webster Dictionary, to procrastinate means, “To be slow or late about doing something that should be done : to delay doing something until a later time because you do not want to do it, because you are lazy, etc.”

However, the Oxford English Dictionary, which we find a bit more reputable, defines it as, “Delay or postpone action; put off doing something.” This definition makes less assumptions about the nature of an act, and focuses instead on exactly what, in essence, the act is. By understanding the difference, we can look at procrastination as the act of putting something off until later and doing other things in the meantime. This can make you more productive in the long run by not forcing yourself to muddle through work that may take concentration that you don’t currently have.

Structured Procrastination
John Perry, a professor at Stanford University and author of The Art of Procrastination: A Guide to Effective Dawdling, Lollygagging, and Postponing, claims that much of his success as a scholar is linked to his desire to put other tasks off until later. In terms of what, exactly, defines his success, he says that it’s an art called “structured procrastination,” in which you don’t waste time by not doing anything, but rather, work on one task instead of another. By effectively managing your time, you can work on one thing after another and avoid that dreaded assignment until it absolutely needs to be completed.

Wait… What?
We realize that might not make sense for some people, but in practice, it might not be a bad idea. For example, Perry always considered himself a procrastinator because he would rather spend time talking with his students over ping pong games or other activities when he should have been grading papers. Realistically, this act wasn’t helping him grade his papers, but it did help him further his image as a professor. By spending time with his students, he was able to craft an image of being approachable and interesting; something most college professors would die for.

This also helped him craft a professional image. Because his students weren’t afraid to approach him, they were able to get the help that they required when they needed it. It’s only natural that something would increase the odds of his students receiving good grades, which in turn makes the professor look good to his colleagues and superiors.

There’s a Difference Between Procrastination and Last-Minute Working
You might be saying, “That sounds like a terrible idea. I’d never get anything done.” Well, the key is to keep your overall deadlines in mind. While you are avoiding that sales pitch and working on other important things, always keep that deadline in mind. Make sure you give yourself adequate time to do a quality job. Perry suggests that you weigh your priorities and make two to-do lists: One for big projects, and the other for small, daily tasks. This way, the large projects that you are avoiding will motivate you to work on the smaller tasks. By doing so, you’ll be making small “wins” for the day, making you feel good and motivating you to work on the big project in the afternoon.

Now that you’ve been introduced to the concept of “structured procrastination,” what are your thoughts on it? Are you willing to give it a shot, or would you rather just try to get everything done in a normal fashion? Let us know in the comments.