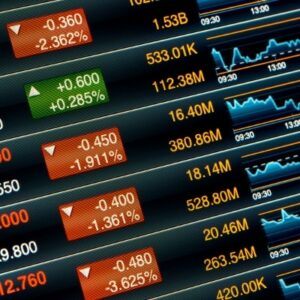 When you think about the stock market, one vibrant image that comes to mind is the chaotic trading floor of the New York Stock Exchange, with traders climbing over each other and barking orders. Today, the NYSE trading floor is much more subdued, a testimony to just how much technology has changed the financial marketplace.

Wall Street, BC (Before Computers)
Even before the advent of the computer, Wall Street was well known for utilizing technology. The ticker tape is a shining example; a fascinating device which gave a real-time and continuous printout on the performance of the market.

When combined with a nearby telephone, these two technologies gave the average Joe the ability to buy and sell securities on a whim. This helped pave the way for near-instantaneous trading, which was largely responsible for the dynamic growth experienced by the stock market during the twentieth century.

Make Way for the Computers
Later, the quotation board was adopted, retiring the iconic ticker tape machines. In the 1980s, modern computing tactics took front and center, thanks to the introduction of the Quotron. With this technology, brokerage houses gained the power to instantaneously manage large hedge funds by quickly reacting to market fluctuations.

The Internet Changes Everything
When the Internet revolution hit, using computers connected over a network wasn’t something new to Wall Street. In fact, as early as the 1970s brokerages had been using Electronic Communications Networks (ECNs) to make their own computer systems more efficient. However, before computer networking could significantly change the operations of a behemoth institution like Wall Street, significant capital first needed to be invested in order to build the infrastructure–a longtime task that was actually funded by significant technology investments being poured into the stock market.

With the rise of the Internet came online brokerages such as ETrade and Ameritrade. However, the major influence of such online tools which gave individual players unparalleled control over their investments is only part of the story. In 1994, two economists, William Christie and Paul Schultz, published a paper titled, “Why do NASDAQ Market Makers Avoid Odd-Eighth Quotes?” where they outlined a deliberate anomaly where market makers were manipulating the spread (the difference between the buy and sell prices of NASDAQ securities) to secure these individuals a higher profit margin. You may recall this event leading to a full-scale investigation and subsequent rule changes by the Security and Exchange Commission (SEC) to protect the smaller investors that made use of these online trading services. Eventually, even the traditional brokerages such as Charles Schwab and TD Waterhouse offered online trading that could be accessed by anyone.

Like with every good bubble, the crazy market growth fueled by Internet technologies (with frenzied spending seen particularly in 1999 and 2000) eventually popped. It took a few long years for the EU and US markets to rebound from the pop of the dot com bubble, but confidence in the markets was eventually restored, thanks to a realization that the Internet was much more than a fad and could be effectively utilized by companies to boost their sales base.

Online Trading at High Speed
No longer faced with the limitations of dial-up modems, today’s Internet speeds make it possible for investors to execute trades in incredibly short intervals–millions of times faster than what can be made by human decision making. This has led to the phenomena of quantitative trading, which uses complex algorithms to do trades so fast that a half a cent here and a half a cent there can lead to millions of dollars changing hands over millions of trades.

However, this technological development helped contribute to another major dip in the market, the housing collapse of 2008. Since then, several strategies and regulations have been implemented in an effort to keep tabs on this fast-paced market.Today, regulators heavily rely on automated systems in an effort to keep investors, traders, brokers, and everyone else involved in quantitative trading honest.

Despite the best efforts of regulators, they still find themselves in a reactive position to wild market fluctuations that are fueled by high-speed trading technologies. This was especially evident on May 6, 2010 in what was known as the “Flash Crash.” Wikipedia gives an account of this fateful day, “The Flash Crash, was a United States trillion-dollar stock market crash, which started at 2:32 p.m. EDT and lasted for approximately 36 minutes. Stock indexes, such as the S&P 500, Dow Jones Industrial Average and Nasdaq Composite, collapsed and rebounded very rapidly. The Dow Jones Industrial Average had its biggest intraday point drop (from the opening) up to that point, plunging 998.5 points (about 9%), most within minutes, only to recover a large part of the loss. It was also the second-largest intraday point swing (difference between intraday high and intraday low) up to that point, at 1,010.14 points. The prices of stocks, stock index futures, options and exchange-traded fund (ETFs) were volatile, thus trading volume spiked. A CFTC 2014 report described it as one of the most turbulent periods in the history of financial markets.”

On the upside, the market rebounded almost as fast as it fell, finishing down only three points. It took regulators over four months to determine the cause of this “hiccup,” which stemmed from an algorithm being triggered by a very large sale of stock, along with the same-day announcement that Greece was bankrupt. Protections have since been put into place, but it just goes to show how volatile technology makes today’s financial markets when millions of trades are being made every minute.

What’s your opinion of all of these crazy changes experienced by the stock market (and perhaps your portfolio) due to the introduction of new technologies? Does it make you more cautious to invest or emboldened to take greater risks?

Additionally, how does the story of technology changing the financial markets relate to how technology has changed your own business model over the years? Has it made you faster, more automated, and more effective? Share your thoughts with us in the comments.