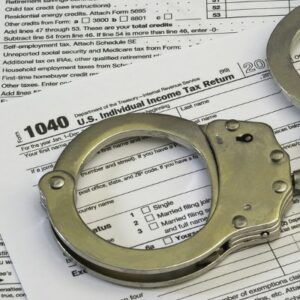 The Internal Revenue Service is one organization that you don’t want to mess with. Thanks to their antics filing fraudulent tax returns through the often-exploited Get Transcript site managed by the IRS, Anthony and Sonia Alika have to do some time in the slammer; and that’s not even mentioning what they have to pay the IRS in restitution.

Mr. Alika is set to serve 80 months in prison followed by three years of supervision upon release, and must pay $1,963,251.75 in restitution for conspiracy to commit money laundering. On the other hand, his wife must serve 21 months of jail time, followed by three years of supervision and an IRS restitution of $245,790.08 for structuring cash withdrawals to avoid the required bank reporting. They both pled guilty to their respective crimes.

Their actual crime: laundering $1 million in money stolen from the U.S. Treasury by filing fraudulent forms. In particular, they filed fraudulent income tax returns using data stolen from the Get Transcript service. Get Transcript was originally created so that taxpayers could review their past returns, but the Alikas used it to obtain data that they needed to steal from the IRS.

The Alikas, and their co-conspirators, would then use the funds to purchase prepaid debit cards, and register them to the identities that they had stolen. They would then file their tax returns using the fake identities and receive the refunds on the prepaid cards. The cards were then used to purchase money orders and deposit the money into bank accounts, which was then withdrawn in small amounts to avoid suspicion and bank reporting.

Keep in mind that this isn’t the first time Get Transcript has been utilized for fraudulent activity. In May 2015, 100,000 tax accounts were stolen and used to steal $50 million from the IRS. That’s a ton of cash that could have been saved if it weren’t for the lax authentication requirements. In response to this case, the United State Department of Justice put out a press release outlining some best practices to keep personal information and accounts as safe and secure as possible.

File Your Taxes Early
If you’ve already filed your legitimate tax return, refund criminals like the Alikas can’t file using your identity. The longer a return goes without being filed, the more time you’re giving hackers to file a fraudulent return using your stolen identity.

Use Strong Usernames and Passwords
This tip can be applied to all online accounts–especially those that contain sensitive information, like your tax return. You should have passwords and usernames that are unique to your person; if someone else were to get ahold of your credentials, or if you share them, the chances of them getting stolen multiply.

BONUS TIP: Randomized strings of upper and lower-case letters, numbers, and (if permitted) symbols are the most secure option when selecting a password.

For more information on how to keep your computer systems and your identity safe, reach out to us at 407-830-1434.